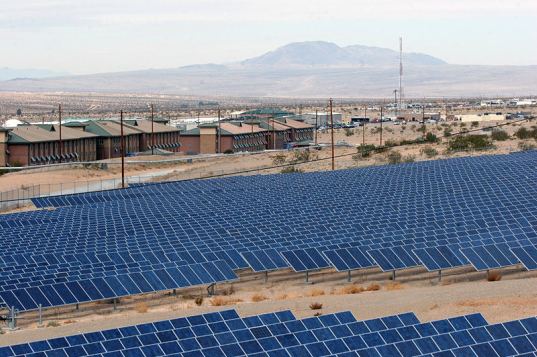 India’s government has unveiled plans to build an “ultra mega” 4 GW solar power plant in the northwestern state of Rajasthan.

According to the government, the plant will be built on a 23,000-acre (9308 ha) site close to Sambhar Lake, about 75 km from Jaipur, the state capitol.

“Being the first project of this scale anywhere in the world this project is expected to set a trend for large scale solar power development in the world,” the government said in a statement. The plant’s proposed capacity is around three times India’s current total solar power production.

The project, called the Sambhar Ultra Mega Green Solar Power Project, is the brainchild of the Ministry of Heavy Industry, which said it expects to complete the 1-GW first phase – 10 times larger than the largest operational Indian solar power plant – by the end of 2016.

“The first phase of the project is expected to be implemented through a joint venture company to be formed with equity from BHEL, Solar Energy Corporation of India, Power Grid Corporation, Satluj Jal Vidyut Nigam and Rajasthan Electronics and Instruments Ltd,” the ministry said. The five companies are state-owned.

“Based on the experience gained during implementation of the first phase of project, the remaining capacity would be implemented through a variety of models,” the ministry continued.

The majority of solar projects in India, developed under the auspices of the Jawaharlal Nehru National Solar Mission, are located in Rajasthan. The state is India’s largest, with high insolation, a strong grid and state-owned land banks for grid-connected solar projects.

India aims to install around 20 GW of grid-connected solar power by 2022. According to reports, theMinistry of New and Renewable Energy (MNRE) has outlined a plan to produce large amounts of solar power in the desert regions of Rajasthan and Gujarat in the next 10 years.

The Prime Minister’s office has reportedly authorised an investigation into areas of desert “wasteland” suitable for building 1-GW solar projects. According to MNRE, India’s entire electricity demand for 2012 could be met if “mega” solar projects were built on just 5 percent of the nation’s unused desert land.

India is expected to add 2.8 GW of solar capacity in 2014, the result of solar power auctions in 2012 and early 2013. Rajasthan has auctioned 75 MW of PV capacity this year, with projects to be commissioned by 2015.

The nation currently has a total of 1761 MW of grid-connected solar capacity.

Feel Proud to be an INDIAN..!!