Next Exit: 7 Green Jobs to choose from

are you looking for a job..?  – There you have it — 7 jobs that should survive and thrive in this economic slump.

While factory workers building cars are losing sleep these days, those lucky enough to be on a wind-turbine line are getting a solid eight hours of sleep a night. Wind power is the fastest-growing source of energy in America and all those turbines need to be built by someone. Modern turbines are highly engineered machines and require hundreds of hands to get from blueprints to installation. With wind power showing no signs of slowing down, building wind turbines is a great (and secure) way to pay the mortgage.

Energy auditors are on the front lines in the war against inefficiency. They’re responsible for evaluating the efficiency of heating and cooling systems as well as the insulation and weatherproofing of homes and businesses. They look for air leaks, missing or incomplete insulation, and make suggestions about the steps necessary to fix problems. Energy auditors often follow up by doing the actual weatherization work, fixing the problems they find in the audit. It’s a life of crawling around basements, caulking gaps between windows and running full-home air-leak tests.

Wind-turbine mechanic
Once a wind turbine is built in the factory and erected in a wind farm, someone needs to keep it tuned. Turbines are basically giant motors that come complete with all the complexities of a typical modern car. You bring your car to an auto mechanic; wind mechanics have to bring themselves to the turbine. Keeping the turbines tuned and in good operating condition makes good business sense for the wind farm owners (inefficiency bleeds dollars), so it’s not hard to see how being a wind-turbine mechanic is a great way to keep working until retirement.

Solar-panel installers spend a lot of time on roofs. They’re part carpenter, part electrician. They roll up to a jobsite for the few days it takes to properly install a solar system and angle and position the panels in the right place, connecting them into the building’s power lines. It’s hands-on work that’s good for anyone wanting a tan on the back of his or her neck. There’s been a lot of talk of upgrading our nation’s energy grid and generation system. It’s a good bet that solar installers will be one of the more stable jobs as we climb out of this economic hole. 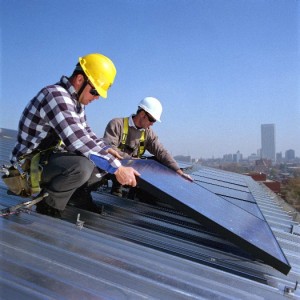 Green builder
It’s not too much of an exaggeration to say that the housing market is in the crapper. After its bubble burst, countless construction workers and home builders suddenly found themselves without work. When no one’s buying homes, no one’s building them, either. That is, unless you’re green. Environmentally hip builders have been able to keep their job sheets filled and their employees on the books. Some of this admittedly is because there are so few qualified green builders relative to the overall industry, but the fact remains that demand for efficient buildings is going nowhere but up.

Hydrogen fuel cells are thought by many experts to be the way we’ll power the cars of tomorrow. They’re an efficient way of storing energy and are clean to boot — the only emissions they produce are water. If tomorrow’s cars will be powered by fuel cells, we’re going to need a lot of engineers today to help us get there. If the past decade has been the domain of the financial engineer, the next 10 years will be the era of the green engineer. Graduates of engineering schools who come out with focuses in fuel-cell technology will find themselves recruited and swooped up by companies like first-round picks in the NBA draft.

Green blogger
OK, so maybe this is just hopeful thinking on the part of the author, but the world needs more smart, green bloggers. Saving the environment is a subject fraught with complex ideas, personalities and ever-advancing science, and it takes a hip writer to sort it all out and frame it in a way that your average reader can grasp. Not that you should go out and try to be a green blogger. We don’t need the competition. 😀