Deconcretisation of Trees Not Possible Without People Support

Delhi People shows the way to De-Concretisation at G.K – I (south delhi)

As Delhi develops into the world class city that ‘many’ are working hard to make it, concretization is the key word. And the concerete does not seem to be seeing an electric pole apart from a tree. And even as much is being said to protect and increase the green cover in the city, the existing greens seem to be choking to death. Most trees are being surrounded by concrete to such an extent that it leaves no breathing space for the tree thus reducing their capacity to keep themself upright.

The de-concretization did see some opposition from some residents, especially those who had gotten it done themselves, but the enthusiasm for conserving nature and perserving natural heritage and the court order ensured that the work has been continuing and over 60 trees have been freed till date. What is now needed is a citywide initiative to take this campaign to every colony and complex in Delhi.

The above was enough for Padmavati Dwivedi and her friends in her GK-I colony to persuade the Government, MCD and related authorities to follow the rules, uphold the law and remove the concrete cement from around all trees in their part of the colony.

By Law: Such concretisation is in violation of the Delhi Preservation of Trees Act, 1994 and the Environment Protection Act, 1986. 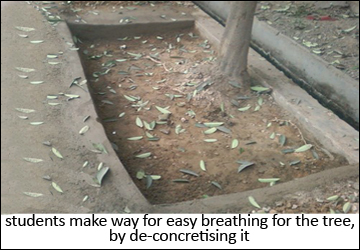 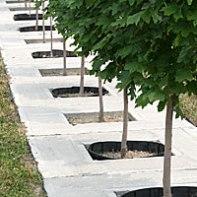