Created by U.S. architectural firm Brooks + Scarpa, the recently completed Green Dot Animo Leadership High School in Inglewood, Los Angeles, wears its green heart very much on its sleeve. The new public school for 500 students is characterized by a large south facing façade covered with 650 solar panels, which not only help shield the building from the sun but also capture an estimated 75 percent of the energy needed to power the school.

According to Brooks + Scarpa the school’s combined sustainable strategies “will reduce carbon emissions by over 3 million pounds (1.36 million kilograms),” which translates to the equivalent of the annual emissions from more than 1000 cars.

In a design that also incorporates passive solar principles, the architects chose to move away from creating a traditional large block-like structure, instead choosing to build the school around a large internal courtyard. Benefiting from the Californian temperate climate, this landscape naturally makes its way into the school’s protected open-air lobby. This design helps to improve the amount of natural light and ventilation that can enter the structure, limiting the need for additional interior lighting and air conditioning.

Where the exterior is not covered with solar panels, ribbed screens have been installed which visually connects the school with its external environment and enable staff members to control how much light can enter the building. 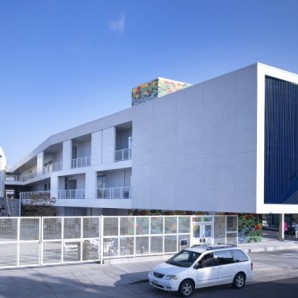